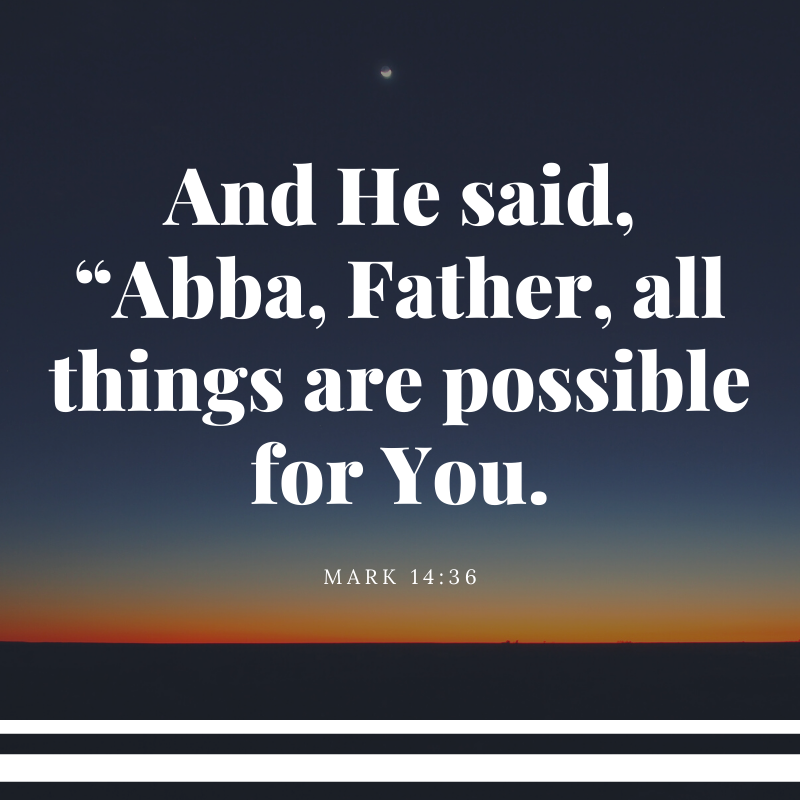 32 Then they came to a place which was named Gethsemane; and He said to His disciples, “Sit here while I pray.” 33 And He took Peter, James, and John with Him, and He began to be troubled and deeply distressed. 34 Then He said to them, “My soul is exceedingly sorrowful, even to death. Stay here and watch.” 35 He went a little farther, and fell on the ground, and prayed that if it were possible, the hour might pass from Him. 36 And He said, “Abba, Father, all things are possible for You. Take this cup away from Me; nevertheless, not what I will, but what You will.”

Let’s freely enter His throne of grace with praise and gratitude. In prayer, let’s please Him by humbling ourselves in His presence so He may hear our cry! We continually ask forgiveness for our shortcomings and for the sins of our nation and nations of the world. We want to see resurrection’s light shine on a new time.

We all go through difficult moments. Yet, the point is not to ask the “why” behind those difficult moments or painful seasons. Rather, we should focus on how to face them. Gethsemane was a place the Lord used to meet with His Father in prayer. Gethsemane means olive press.

What was Jesus doing at Gethsemane? He went there to pray because He knew what was to come would be very strong. Only prayer with the Father will keep us strong and certain of our purpose

His soul became exceedingly sorrowful, even to death. He fell on the ground, and prayed that if it were possible, the hour might pass from Him. However, He could not fail God's plan; Adam had failed. He knew that His life had purpose.

And He said, “Abba, Father, all things are possible for You. Take this cup away from Me; nevertheless, not what I will, but what You will.”

They arrested Him in that place; He faced death.

33 Now when the sixth hour had come, there was darkness over the whole land until the ninth hour. 34 And at the ninth hour Jesus cried out with a loud voice, saying, “Eloi, Eloi, lama sabachthani?” which is translated, “My God, My God, why have You forsaken Me?” 35 Some of those who stood by, when they heard that, said, “Look, He is calling for Elijah!” 36 Then someone ran and filled a sponge full of sour wine, put it on a reed, and offered it to Him to drink, saying, “Let Him alone; let us see if Elijah will come to take Him down.” 37 And Jesus cried out with a loud voice, and breathed His last. 38 Then the veil of the temple was torn in two from top to bottom.

The approaching event began affecting earth’s climate and atmosphere. Jesus suffered three hours from the nails pierced into His hands and feet before He breathed His last.

37 And Jesus cried out with a loud voice, and breathed His last. 38 Then the veil of the temple was torn in two from top to bottom.

The veil was a thick curtain that separated the Holy place from the Holy of Holies place.

1 Then indeed, even the first covenant had ordinances of divine service and the earthly sanctuary. 2 For a tabernacle was prepared: the first part, in which was the lampstand, the table, and the showbread, which is called the sanctuary; 3 and behind the second veil, the part of the tabernacle which is called the Holiest of All, 4 which had the golden censer and the ark of the covenant overlaid on all sides with gold, in which were the golden pot that had the manna, Aaron’s rod that budded, and the tablets of the covenant; 5 and above it were the cherubim of glory overshadowing the mercy seat. Of these things we cannot now speak in detail.
6 Now when these things had been thus prepared, the priests always went into the first part of the tabernacle, performing the services. 7 But into the second part the high priest went alone once a year, not without blood, which he offered for himself and for the people’s sins committed in ignorance; 8 the Holy Spirit indicating this, that the way into the Holiest of All was not yet made manifest while the first tabernacle was still standing. 9 It was symbolic for the present time in which both gifts and sacrifices are offered which cannot make him who performed the service perfect in regard to the conscience— 10 concerned only with foods and drinks, various washings, and fleshly ordinances imposed until the time of reformation.
11 But Christ came as High Priest of the good things to come, with the greater and more perfect tabernacle not made with hands, that is, not of this creation. 12 Not with the blood of goats and calves, but with His own blood He entered the Most Holy Place once for all, having obtained eternal redemption. 13 For if the blood of bulls and goats and the ashes of a heifer, sprinkling the unclean, sanctifies for the purifying of the flesh, 14 how much more shall the blood of Christ, who through the eternal Spirit offered Himself without spot to God, cleanse your conscience from dead works to serve the living God?

The tearing of the veil came about after Jesus cried out with a loud voice. He said, “It is finished!”

Seeing then that we have a great High Priest who has passed through the heavens, Jesus the Son of God, let us hold fast our confession.

Jesus cried out with a loud voice causing an earthquake; supernaturally, the veil of the temple was torn in two from top to bottom. The veil prevented entrance into the Holy of Holies place. Only the high priest could enter the presence of the Lord in the Holy of Holies place. The high priest did so only once a year and on a special day in order to offer sacrifices on behalf of the people. He would enter with a cord and bells tied around his waist that made noise. If the noise stopped it was because the high priest had died. Thus, the high priest had to enter in complete holiness and purity to offer sacrifices.

2 But your iniquities have separated you from your God;
And your sins have hidden His face from you,
So that He will not hear.
3 For your hands are defiled with blood,
And your fingers with iniquity;
Your lips have spoken lies,
Your tongue has muttered perversity.

In that He says, “A new covenant,” He has made the first obsolete. Now what is becoming obsolete and growing old is ready to vanish away.

Jesus is the way, the truth and the life.

The old covenant ended with His death and a new dispensation began - a period of grace.

Through the path He opened for us we can confidently enter into the throne of His grace.

19 Therefore, brethren, having boldness to enter the Holiest by the blood of Jesus, 20 by a new and living way which He consecrated for us, through the veil, that is, His flesh, 21 and having a High Priest over the house of God, 22 let us draw near with a true heart in full assurance of faith, having our hearts sprinkled from an evil conscience and our bodies washed with pure water.

The Temple’s veil was torn in two from top to bottom. “From top” means divine transcendence. “To bottom” means our human reality. We are called to bring heaven on earth.

Then He said to them, “Thus it is written, [a]and thus it was necessary for the Christ to suffer and to rise from the dead the third day,

His resurrection is the reality of our faith. His sacrifice, death, and resurrection not only gave us eternal life but also gave us orders to follow. We must fulfill the great commission. We have the means and benefits to do His will.

Go therefore and make disciples of all the nations, baptizing them in the name of the Father and of the Son and of the Holy Spirit,

The nails that were pierced through His hands and feet activate us to fulfill the great commission.

My loved ones, Bethania family -
As we conclude our fast, we believe God is working. We’ll see His power and light in the midst of darkness. Let’s continue to intercede while we hold onto the Word which is alive and effective. Let’s pray in the morning, in the afternoon, at night, and at dawn. God bless you.