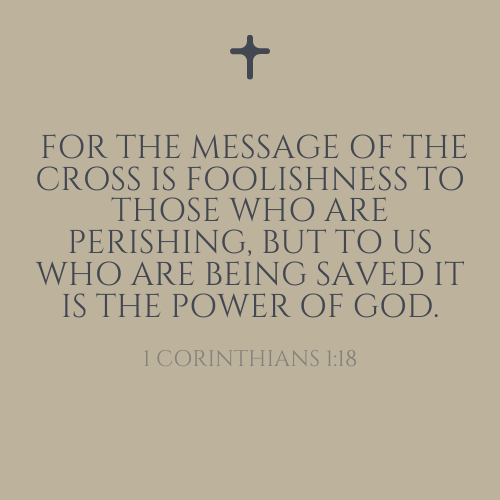 18 For the message of the cross is foolishness to those who are perishing, but to us who are being saved it is the power of God. 19 For it is written: “I will destroy the wisdom of the wise, And bring to nothing the understanding of the prudent.” 20 Where is the wise? Where is the scribe? Where is the disputer of this age? Has not God made foolish the wisdom of this world? 21 For since, in the wisdom of God, the world through wisdom did not know God, it pleased God through the foolishness of the message preached to save those who believe. 22 For Jews request a sign, and Greeks seek after wisdom; 23 but we preach Christ crucified, to the Jews a stumbling block and to the Greeks foolishness

Let’s praise Him as we enter His presence with thanksgiving. We pray and intercede in brokenness. We stand in the gap for those who are suffering and dying without Christ.

Let’s ask mercy for our President, civil, military, and spiritual authorities. Let’s pray and minister over our families for peace, emotional healing, and trust.

In moments of grief, death, and despair, everyone looks for someone to turn to for an answer.

3 Declare His glory among the nations, His wonders among all peoples. 4 For the Lord is great and greatly to be praised; He is to be feared above all gods. 5 For all the gods of the peoples are idols, But the Lord made the heavens.

Religion tries to reach God yet it’s powerless to change anyone. Only the power of the gospel in Christ Jesus can do it. He came to save what is lost. The change that Christ brings about is internal, from the inside out.

Jesus Christ was a stumbling block for the Jews; He is still a stumbling block for many because they still do not understand Him. There are people who admit they have needs, but do not believe Jesus is the answer. Christ's message is one of salvation, forgiveness of sins, healing, restoration and his eminent return. His return is soon, however He’s not coming to save but to judge.

11 For it is written: “As I live, says the Lord, Every knee shall bow to Me, And every tongue shall confess to God.” 12 So then each of us shall give account of himself to God.

Long before Jesus was crucified on the cross at Calvary, He exhorted us to take up our cross daily and follow after him. This is what a disciple does.

23 Then He said to them all, “If anyone desires to come after Me, let him deny himself, and take up his cross daily, and follow Me.

The Romans used the cross as a brutal method of criminal execution but through Christ's sacrifice the message of the cross became a message of hope.

These passages are very important. Let’s understand them since we are currently going through a season of affliction. The majority of people are anguished by the world - death, pain, hunger, etc. This represents the cross without Christ. Needless to say, children of the Kingdom must understand that we are in the world but not of the world. We should learn to discard our earthly mentality and adopt the mind of Christ. These types of events will always occur. They announce to the coming of the King.

Our duty is to be the difference, to be light in the midst of darkness, and to bring comfort to those who need it.

Father, in the mighty name of Christ, we thank you for having sent your Son to die on a cross like a criminal so that today we can have peace. Thank you for freeing us of all curses. We ask and plead that you may set the nations free. May they know Jesus. Amen.